skip to main | skip to sidebar

Perhaps you're wondering why I stopped posting here. Did the MBTA or MBCR suddenly make huge improvements in the Franklin line? Did I die, or flee the country?

No, no, and no. The explanation is much more mundane: I became a telecommuter. After thirteen years in the office, and eight or nine of those years commuting four hours a day from Rhode Island to Boston (round trip), my employer gave me the option to work from home. Deeply as I have always loved the city of Boston, I have to admit that the daily commute was taking a real toll on me. So I agreed.

It's a different life. Instead of waking up to a tortuous alarm clock before the sun rises and forcing my family to get up so they can drive me to the train station, I sleep late and wake up with plenty of time to stroll down the hallway to my work area. I can have lunch with my wife, and see my son as soon as he comes home from school. It's a whole new life, and a better one. I only wish that more people had that option!

But I do take the T in to Boston once in a while for meetings. And on a recent late-night trip home, I took another look at the crumbling staircase at Ruggles. A couple of photos came out clearly enough: 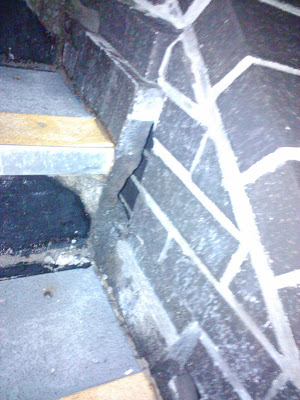 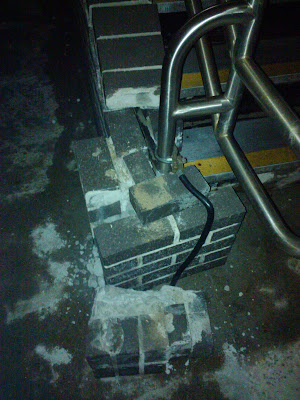 On the other side of the staircase, the situation is equally desperate. It's literally falling to pieces, as you can see here. Now, I actually led a T representative physically to this staircase last year and showed him what was going on, and he seemed to realize that there was a real danger. So I can't say why nothing has been done to rectify the situation, although I'd bet a shortage of funds will be blamed.

Other than that, I'm sorry to see that the T's thirty-minute money-back policy is apparently going to be discontinued, if it hasn't been ended already. This is nothing but an encouragement for even worse service.

So...am I glad to be off that train? Well, yes. I'd be dishonest if I didn't admit it. But I'll admit that I miss Boston, and once in a while I miss taking the train. I even miss the comic misadventures, lousy service, and rude conductors (noting, as always, that most conductors are not rude).

I'll continue to keep an eye on things on my rare trips to town, so this isn't the final post. But realistically, there certainly won't be as many posts as I used to make. I just don't have the material any more!
Posted by Quasit at 9:26 PM 2 comments: 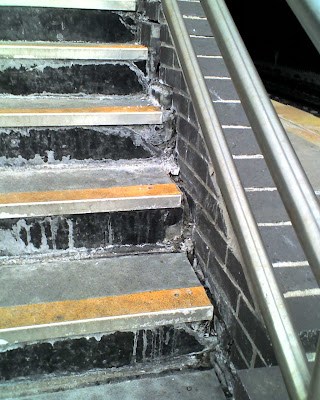 The stairs at Ruggles continue to decay. The morter is crumbling away. 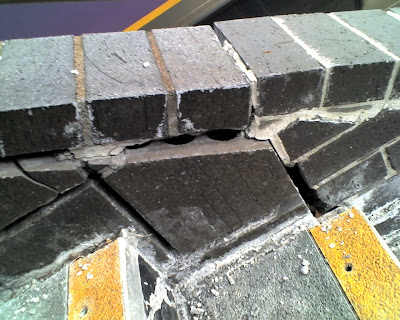 As you can see above, the whole structure has shifted so much that the
internal holes in one of the bricks have been exposed. 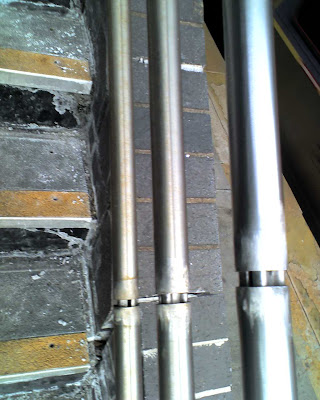 The staircase is slowly spreading outward at the base; another effect of this slow-motion collapse has been to pull apart the railing on the left side, as you walk downstairs. 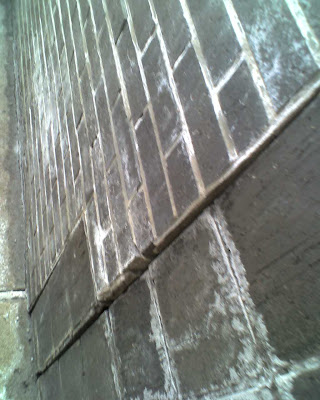 On the outer side of the staircase, you can see that the wall is visibly bowing outward. I can't imagine that this is a safe situation! Would any public safety inspector allow a staircase in this condition to be used by the public? I have to doubt it.

The weird thing, of course, is that those stairs were closed for at least two years for repairs, and only re-opened in August 2007. Will they make it to August 2010? I don't know. Will they be closed for another two years for repairs again? I couldn't say. Will the next set of repairs last longer than three years? I'd like to believe so - but see no reason for hope!
Posted by Quasit at 6:45 PM 1 comment:

On January 6th I got one of the funnier emails that the MBCR has created so far. It included the following gem:

"Please enter and exit only through a door that is attended by a crewmember."

Apparently whoever writes those emails has never actually ridden the commuter rail. Because if that rule were ever enforced, every train in the entire system would be consistently 20 minutes late, or more, every day. Why? Because each train would have only one working door.

There AREN'T conductors at most doors - ever. I haven't exited a door on the evening train once since I got that letter that had a conductor within two coachlengths. Today I looked around, out of curiousity. For the five-coach train (three singles, two doubles) there was exactly ONE conductor visible.

If they're providing enough conductors to be at each pair of doors on each train, I don't know where those conductors are disappearing to! But it seems more likely that MBCR management is shorting the trains and the public of the staff needed to carry their own rules. This way, when something goes horribly wrong, they can point to this email and say "See? We told people not to use unsupervised doors!".

Posted by Quasit at 6:37 PM No comments:

They closed the Franklin/Dean College station down permanently a couple of months ago - another cost-cutting measure, presumably. I can't say that the timing was great. That station was definitely being used - it was always packed with commuters, dozens of them, every weekday morning.

Especially on cold mornings, of course. Which is why the timing is so particularly bad. The Franklin/Dean parking lot is quite small, so a lot of people are dropped off at the station in the mornings. Now they have no place to stay warm while waiting for the train.

And god help them if a train is late, as they still sometimes are. At least once every couple of months a train has serious problems and has to be canceled, resulting in a wait of an hour or more until the next train comes by.

Apart from that, though, I have to say this: that was a really interesting old station. It was very shabby, with a lot of personality. There used to be little model trains in it, here and there; my son loved to look at them. The coffee and donuts weren't at all bad, and there was a nice rack of used books that weren't too expensive. The bathroom was tiny and, well, odd; a minuscule little sink, an old-fashioned radiator, and a few faded decorations.

Down a corridor in the back, there was a dark room with an old sofa on it. It didn't seem to be for the public. Sometimes several people were sitting on it, but I got the impression that it was for station personnel. It was strange, but interesting. The station was an oasis of old-fashioned quirky shabbiness in a world of impersonal grunge and decay.

I suppose it will just fall apart, now.
Posted by Quasit at 6:27 PM No comments:

The Franklin 1719 continues to have adequate seating, to my surprise. The same can't always be said of the Providence #811, departing South Station at 3:45 PM.

It's not always jammed, but in the past several months I've seen passengers jammed into the vestibules several times. Here are a couple of photos from a couple of months ago: 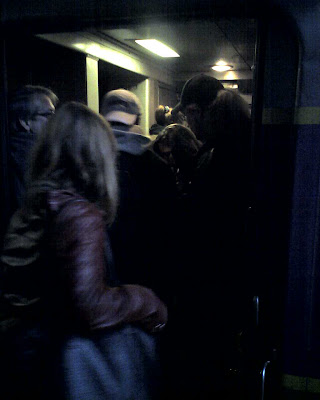 Once they crowded into the vestibule, that's pretty much where they had to stay. Every aisle was packed. 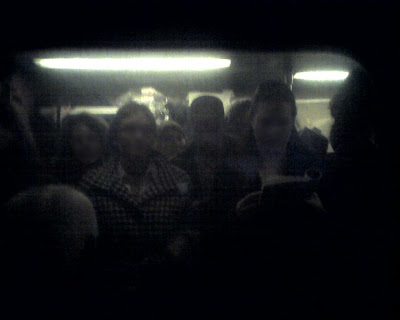 Strange morning, courtesy of the MBCR

Strange things were happening on the #708 train out of Franklin this morning. It was a double train, with an engine in the middle; I heard that the prior train had broken down, and was being pushed along.

I also saw my first "wrapped" coach, a double that had been turned into a huge advertisement for some bank. Here's a photo: 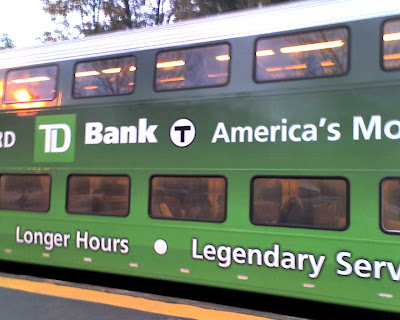 On the train, a woman had a large brown dog sitting on the seat next to her. It was some sort of hound, and was letting out a near-continuous high-pitched whine. I didn't see anything to indicate that it was a service dog. I couldn't tell if a ticket had been purchased for it, although it was using a full seat and it was VERY crowded on the train that morning. People were jammed in the aisles.

The train was due in at Ruggles at 7:50 AM, but didn't arrive until 8:24. So accordingly I put in for the on-time guarantee. I guess that will make up for the $8.75 I was charged for forgetting to change my pass on the 1st!

The stairway at Ruggles continues to deteriorate. Intriguing deep holes are opening up in the sides of it: 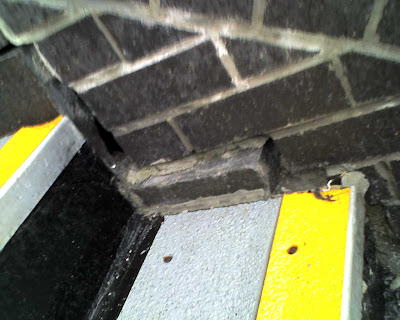 A week ago I saw that the afternoon Providence train (stopping at Ruggles on the outbound trip at roughly 3:56 PM) was incredibly crowded. People were jammed into the vestibule areas, between coaches - the areas with signs that say "PASSENGERS ARE NOT PERMITTED TO RIDE IN THE VESTIBULE". I counted at least ten people in one vestibule, and more than that in two others.

I also had an interesting ride home last week; when I got on the coach, it was pitch black inside. I mean really black; the only light came from a laptop that some guy was using down at the other end of the coach. 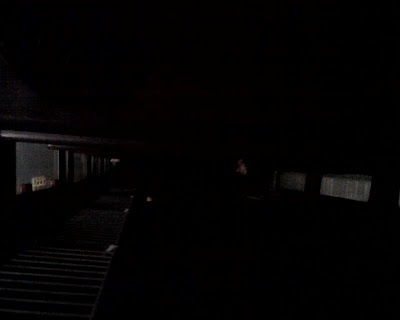 It was eerie! The power came back after about fifteen minutes, though.
Posted by Quasit at 8:17 AM No comments:

It's boring, waiting for the train at Ruggles in the evening, so once again I was looking at the stairs. The disintegration continues, but today I saw something new: 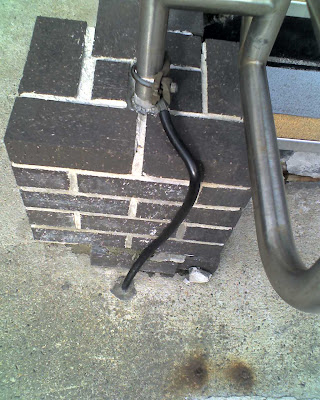 What IS that thing? It looks like a heavy cable, almost like a motorcycle lock, clamped around the base of the stair railing - and the other end goes into the concrete. Where the insulation doesn't cover it, it's clearly a multiple-wire cable. It can't be electrical. It doesn't look as if it has any structural purpose - how could it be holding anything in place? It's not tightly attached! Why does it go into the cement? Does anyone know?

There's another cable just like it on the other side of the stairs, by the way.

You might have noticed that there are bricks missing at the left-hand bottom side of the base of the stairs now. Here's a better shot: 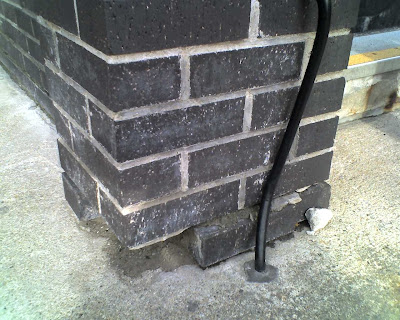 Could the cable be some sort of temporary thing, like a clamp to hold things in place? It really doesn't look like it to me.
Posted by Quasit at 7:48 PM 6 comments: